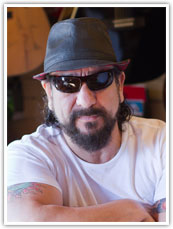 Kenny is the store owner as well as an instructor. He started playing at age 7 and went on to learn theory with jazz guitarist Mark Anthony. Kenny also studied a year with classical guitarist Roberto Torres. Later, before she was famous, he studied tapping with Jennifer Batten (Michael Jackson). Before going on tour wth the country band, Big Sky, Kenny also studied with telecaster maniac, Will Ray (Hellecasters) and Jump Blues specialist Tommy Harkenrider.

During the 80’s Kenny made a name for himself on the sunset strip with heavy metal band, Defiant and had his song “Nightstalker” played on local radio KNAC. It was on solid rotation at hundreds of college stations around the country. Kenny also earned a degree in sound and video engineering from the Institute of Audio/Video Engineering.

These days he has succeeded in bringing a whole music scene to beach town Dana Point, with the city’s first music store and school. Even though there have been imitations, Kenny has tried to bring the quality of LA musicianship to Orange county. He has sought out the best of the best musicians and teachers to bring a quality of education that can’t be surpassed.

Throughout the 80’s, Kenny acted extensively on television and made numerous musical appearances which he still continues to this day. Kenny has performed with Max Bennett (Joni Mitchell, Ella Fitzgerald), Guitar Shorty, and countless blues bands. You can still see him live at local venues like Iva Lee’s, Mozambique and festivals like The New Blues Festival, Dana Point Wine, Food Festival and OC fairgrounds and more. With 60 years of playing, recording, touring and instructing, his goal is to give back to the community and put music in every household.